Donate
Glucose-6-Phosphate Dehydrogenase deficiency (G6PDd) is a metabolic disorder caused by a mutation in the gene for the enzyme glucose-6-phosphate dehydrogenase.

Although many mutations of many different genes are known, the probability of any given individual spontaneously acquiring a new deleterious mutation is actually very low. Thus, in the vast majority of cases, someone has a variant such as G6PD deficiency because they have inherited it from one or sometimes both parents. As an inherited genetic disorder, G6PD deficiency (G6PDd) is not a disease that one can acquire or be cured of; it is part of the inherent genetic makeup that is with you for your whole life.

The gene that codes for the enzyme glucose 6-phosphate dehydrogenase (G6PD) is located on the X chromosome and is quite near the genes for coagulation Factor VIII (a variant of which causes Hemophilia) and for colorblindness. The location on the X chromosome has particular consequences for its pattern of inheritance.

A Brief Introduction to Genes and Inheritance:

Every normal human being has 23 pairs of chromosomes. In all cases except one, the two members of the pair contain the same set of genes coding for the same proteins. When a reproductive cell (gamete) is formed, it gets just one member of each pair. The joining (fusion) of two gametes, sperm cell and ovum, forms a zygote, which once again has two copies of each chromosome, and thus two copies of each gene, and so has the potential to grow into a viable human being. The exception to this process is the pair of sex chromosomes called X and Y.

You can see easily from the diagram that the likelihood of a child being a female is 2/4 or 50% and similarly for a boy. And that is, of course, what we find in the population.

Since most chromosomes are present as pairs, two copies of most genes are present in any given individual. This means that if one copy has a mutation that would lead to an inactive or partially active protein, the other copy of the gene has the correct code and can produce enough normal functional protein. Such a person is said to be heterozygous for that particular trait and this is explains why most genetic diseases are recessive. It is only offspring who inherit two altered copies, one from each parent, who show the symptoms; they are termed homozygous for the trait. (And someone with two normal genes is similarly homozygous for the normal gene.)

When it comes to the sex chromosomes, however, different genes are found on the X and Y chromosomes. The result of this is that for a gene located on either the X or the Y chromosome, two copies are present in a female but only one copy is present in the cells of the body of a male. This means that when a trait such as G6PD deficiency is located on the X chromosome, a female can still be heterozygous or homozygous depending if she has one or both chromosomes bearing the variant gene. A male, on the other hand, is said to be hemizygous if his single X chromosome carries the variant gene.

A female who is heterozygous for the G6PDd trait has a 50% probability of passing it on to either a male or a female child but if she is homozygous all her children will inherit one copy of the variant gene from her.

We can illustrate all the possible combinations by a set of five Punnett Squares where the X chromosomes that carry a variant gene for G6PD that causes a deficiency is labeled as Xdef: 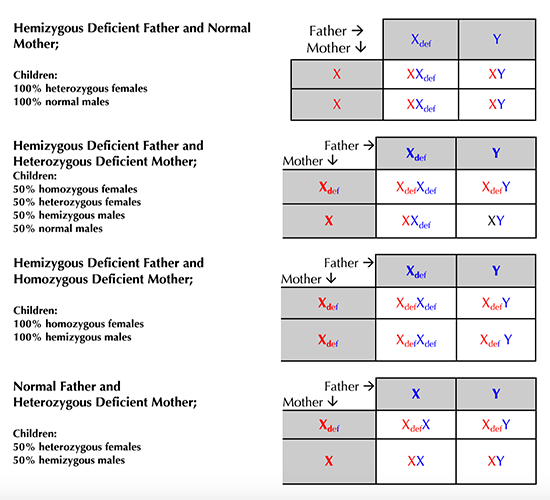 G6PD Deficiency is not Recessive:

Normally when a person is heterozygous for an enzyme deficiency, enough enzyme is produced from the normal copy of the gene (present on the other chromosome) to maintain normal metabolic processes. The person has no symptoms of deficiency and thus the trait is termed recessive. When the gene in question, such as the G6PD gene, is located on the X chromosome, something different happens. In any given cell, one X chromosome is active and the other is inactivated. Heterozygous females, therefore, are genetic mosaics, with a random mix of normal cells and cells that are just as abnormal as those of a hemizygous male. The mix is not constant over time but can be quite variable and the measured G6PD activity may range from 10% to 60% of normal.

The result of this is that heterozygous females are “partially deficient”. Although they tend to have less severe clinical symptoms, they are still susceptible to the same triggers of acute hemolytic attacks as deficient males. The variable levels of G6PD activity in their red cells, generally higher than in deficient males, mean that they are much harder to detect by routine screening especially when semi-quantitative methods are used.

G6PD Deficiency in the Family:

The frequency of new spontaneous mutations of the G6PD gene is about one in one million. Thus, whenever a child is diagnosed with G6PD deficiency it almost always because he or she has inherited it from one or both parents. As the diagrams of inheritance show, the variant may be present in either or both parents. Screening of family members, parents and siblings, may be desirable, both to identify possible unrecognized cases and also to indicate the likelihood of future offspring inheriting the trait. This is an option that should be discussed with your healthcare provider.